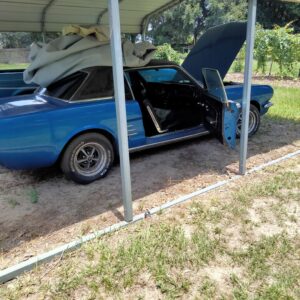 A Once fully restored car was set outside under a car port only to be forgotten after shortly adding a fresh Blue paint job, new vinyl top and black interior.

we were able to make a deal with it despite it not running, brought it back to the shop,

done some floor repair, (Mustangs are infamous for bad floor pans) and the pans were pretty bad to be fair in the least,

full tune up, new gas tank and fuel sending unit, some minor rewiring, a detail and she was looking better than she did in years!

we sold it shortly after to a gentlemen who was originally from france and now lived on the space coast and whom was a avid collector of American Muscle cars, (He added it to his collection of other Blue Cars, 60’s Charger & Challenger)

He DEFINITELY liked his Mopars but wanted to change it up a bit!

if you have a car that has been sitting in your Barn, Car port, OR GARAGE! We are interested Regardless of the condition.